Regarded as the national game of the United States, baseball is one of several sports that utilize custom uniforms for clubs and teams. You’ll find custom baseball uniforms for players at every level, including Little League, youth, college and high school, and of course the Major Leagues. So if you haven’t ordered your baseball uniforms yet, make sure you cover all bases when you do.

When it comes to professional teams of Major League Baseball, there is a strict code of rules that governs not only play and the equipment used for games, but also the baseball uniforms that must be worn. These rules apply to all leagues that belong to the National Association of Professional Baseball Leagues.

Even though non-professional and amateur organizations are not obliged to play baseball according to these professional rules, many do, particularly when it comes to team uniforms.

What The Rules Say About Custom Baseball Uniforms

All players on a team are required to wear matching custom baseball uniforms that are identical in terms of style, trim and color. If any part of undershirts is visible and not covered by the baseball jersey, then all players must wear the same color undershirt.

All uniforms must have the player’s number on the back, and it must be at least six inches high. Players, except for the pitcher, are allowed to have numbers, letters and insignia on the sleeve of their undershirts. However, nothing that suggests or imitates a baseball shape is allowed. Patches with commercial advertising are also prohibited. 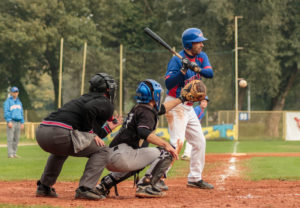 Leagues may, if they wish, include players’ surnames on the back of all uniforms, but these must be consistent and all team member uniforms must then display the name.

Because people are different sizes, sleeve lengths can be different, though the rules state that they should be approximately the same length. Frayed, slit and ragged sleeves are not permitted; nor are polished metal or glass buttons.

If a uniform doesn’t conform to the custom baseball uniforms worn by other team members, that person won’t be allowed to play in the match. Even though they are not mentioned in the official rules, since pants, socks and caps are also part of baseball uniforms these should also be the same color (or colors) for the entire team.

Leagues have a choice whether to have one distinctive baseball uniform or two sets, white that they wear when playing home games, and a color for away games. The tradition of having two uniforms goes back to the end of the 19th century, though originally all teams wore white at home, and either gray, black or dark blue when on the road. Patterned uniforms, including stripes and checks, became popular during the 20th century.

Who Else Wears Custom Baseball Uniforms

Apart from the team players, baseball coaches and managers also commonly wear team uniforms. While partly due to tradition, the definition of terms in the rules for professional teams state that a “base coach” and a “coach” are “a team member in uniform.” Further, the rules say that base coaches must be in team uniform. Base coaches are also required to wear protective helmets along with other players.

While not referenced in the rules, managers were traditionally players, which may be why they usually wear team uniforms at games.

Of course umpires also wear custom baseball uniforms, although not team uniforms. Even though the official rules don’t specify what uniform umpires should wear, the rules do state that all umpires should keep their uniforms in “good condition.”

Whether you decide to follow the rules or not, Thompson’s Sport Shop in Savannah supplies all types of custom baseball uniforms that boast professional quality at a reasonable price.